To delve into parametric design in architecture, Dsearch focused on design computation in the exploration of a graphic expression for the façade of Humanistiska Teatern.

White was commissioned as architects to deli­ver the design drawings for the façade of the Humanistiska Teatern auditorium at Uppsala University. Dsearch collaborated with artist Ann Lieslegaard, which resulted in a proposal for a perforated façade screen as a singular, but variable, architectural element.

A design system was developed, automatically generating the punching pattern from the architects' sketch model.

The role as artist consultant en­tailed a guarding of artistic intent in the trans­lation from video stills to punched metal – ma­king sure that the impression of the motif was not disrupted by technical or formal issues. It also entailed the responsibility to communica­te and clarify the architectural conditions of the building to provide the artist with a re­levant context.

The case of Humanistiska Tea­tern shows the potential for further explo­ration of this interface and the capacity of design computation to manage the complexi­ties arising from integrating artistic and archi­tectural intent with advanced building-scale fabrication. 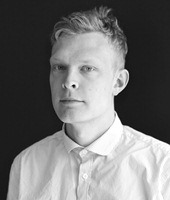