Between Uppsala Resecentrum and the lush Frodeparken, in one of the city's most attractive locations, White have designed a residential building that with its façade of integrated solar cells is an energy milestone.

Frodeparken is the finishing building block of the large work that White have completed in the area around Uppsala Resecentrum since 2002, from city level down to detail level.

In 2006, White won the commission to design a residential building for Uppsala town that combines an energy profile with a distinctive architecture highlighting Uppsala’s importance as Sweden’s fourth largest city.

The building expresses and stands for an architecture where our time is making a clear impression.

In total, the façade is made of 1.800 solar panels that produces 70.000 kWh a year. That is enough to sustain the buildings’ need for electricity for elevators, lighting and ventilation. Solar cells are a material that repays itself, and their long life makes it financially a win as well.

The façade of the whole building is made from integrated solar cells, which makes it  the largest solar cells façade of a residential building in the Nordics. The façade also draws on Uppsala’s position as an education and science city, where the country’s most primary solar cells research is conducted.

The building expresses and stands for an architecture where our time is making a clear impression. Everyone arriving in Uppsala by train from the South can see the  curved house that form a nine meters long arched screen towards the railway and station area.

With powerful architecture and smart energy systems, the Frodeparken building is a shimmering representative of the knowledge city of Uppsala.

The house has an urban side opposite Stationsgatan and a green park side towards the woody Frodeparken. The entry has a glass façade and will accommodate shops and a pre-school with four departments.

There are 70 apartments, from five to one room with kitchen. Several apartments are all through, with living rooms and kitchen  facing South towards the street and with a quiet side for the bedroom and balcony opposite the park. On the roof, like a shining lantern, is a shared space for the residents. 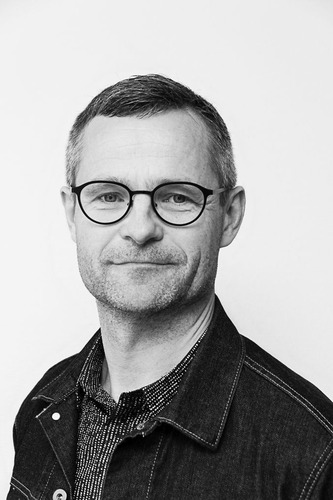