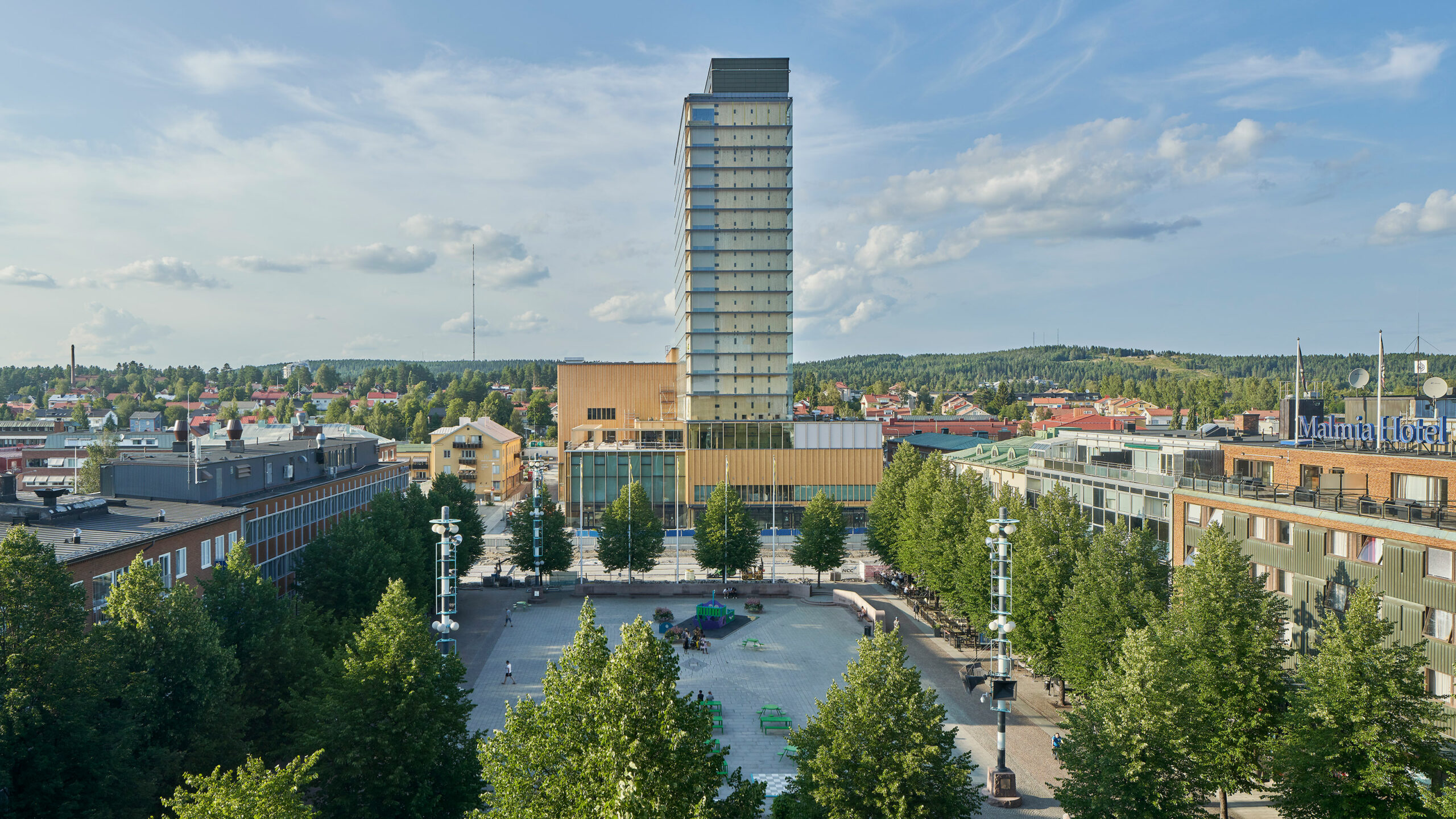 The fact that it was even available.

Just across the street from the city’s central square. “The square of opportunities.” A name that finally seems justified.

Skellefteå is a city in development. A population of 72,000 will become 100,000. In ten years. A growth figure not even Stockholm can match, and one mainly attributed to Northvolt, currently building Europe’s largest battery factory among the typically Swedish red wooden houses on the outskirts of Skellefteå. Number of employees: 3,000. But ten times that if you also count the families and the supplier companies. What will these highly educated high-tech engineers find to do in this northern Swedish mining town? Hang out at the local fast-food joint, Korv-Ivars?

This is where Sara comes in. The cultural centre named after Sara Lidman, one of 20th century Sweden’s most important authors and playwrights – she was from this region of Sweden (Västerbotten), wrote about poor farmers and workers, and had a punk hairstyle long before punk was even a thing. An apt reference, then, and not only because the cultural centre is home to a library and theatre (with six stages). At 75 metres, Sara (the house, not the writer) is one of the tallest wooden buildings in the world. A bold move in a relatively quiet city. Provocative, even. Just like Sara (the writer).

It’s a landmark, that goes without saying. Skellefteå is small-scale, and the 20-floor hotel skyscraper sticks up like a birthday candle. A candle attached to an expansive cake of four layers, taking up a whole expansive block. Without ever being perceived as dominating, split as it is into five different pieces, all of varying height and width. Your gaze takes parkour leaps from one volume to the next, right up to the restaurant at the top of the tower. An absolutely necessary institution if the city is to attract academically educated citizens.

This is architecture that fits perfectly into its context, even a quick look tells you that. 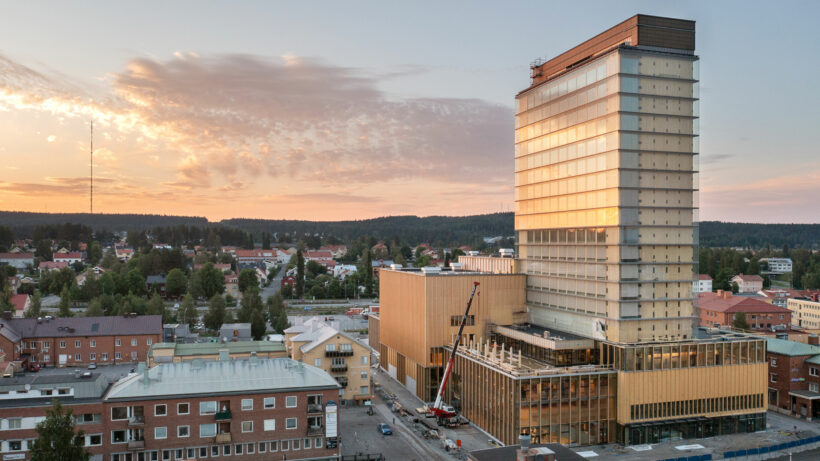 This is architecture that fits perfectly into its context, even a quick look tells you that. Meteorologically – the building forms a wall against the north wind, and the tower casts its long shadow across the car park and railway tracks on the north side, while the square can enjoy the sun all day. But also environmentally and economically – all the wood comes from the region’s coniferous forests, it has been sawn at the Martinsons mill only about 60 kilometres away, and polluting transport has been kept to a minimum. And of course the local wood industry has been given a real boost; if Sara can stimulate more building with wood in Sweden and internationally, Västerbotten is sitting on a treasure chest – the region has plenty of ‘green gold’.

What distinguishes Sara Cultural Centre from most other ‘wooden buildings’, apart from its height, is that this one actually is made of wood. Yes, there are a few concrete elements – timber is not great in a damp basement – and some steel – the grandiose foyer would not have been possible without those black crossbars – but the actual frame structure is solid wood, as are both lift-shafts, and all the floors, walls and roofs above ground. Exceptional consistency of material. Many other buildings ‘cheat’: less ambitious wood projects cast concrete frames and add some extra cement to the upper floors to increase the building’s weight and make sure it doesn’t sway in high winds. But with Sara, no shortcuts have been taken. Everything is reported, nothing hidden. The architects have managed the seasickness issue in the main tower’s short ends: massive prefab elements stacked on top of each other, intricately joined to minimise structural movement. The wooden walls shimmer behind the seamless glass facade, like golden jewellery in a glass cabinet.

With time, Sara’s wooden skeleton will of course turn grey. It will get dirty and worn, bumped and bruised. On a dull winter’s day (and Skellefteå does have long winters), the facade may well look a sorry sight. But the architectural attractiveness will never fade. Sara is a magnificent building. Classic yet modern, with its austere, well-balanced composition. And the interior is no less magnificent – the foyer is one of the most striking spaces in Swedish architecture of recent decades. And the fact that the material is part of the fascination will be immediately obvious to the many visitors the institution is expecting; we all have a relationship with wood, we’ve all whittled a stick, most houses in Sweden are made of wood, but here we see the material in leviathan proportions, used on a scale never previously conceivable. It all feels so familiar. And yet so different. So homely. And yet so palatial.

Mark Isitt, born in 1966, is a journalist and writer from the Swedish island of Marstrand. He has written on architecture and design for both Swedish and international journals since the late eighties. 1999–2007 he was editor-in-chief for the Nordic architecture magazine Forum and since 2007 he has been architecture critic for the Swedish daily Göteborgs-Posten. He hosts Stadsinspektionen (Swedish national radio), Grand Designs Sverige (TV4) and serves as expert commentator on Hemma hos arkitekten (Swedish national television). He has written numerous books, including United Nations: The Story Behind the Headquarters of the World (Max Ström, 2015), and Stockholm Sub (Frank Review, 2018) on Stockholm’s subway architecture. In 2019 Isitt won the Swedish Architects’ Critic’s Prize and in 2020 he was awarded the Olle Engkvist medal for “High quality journalism”.)