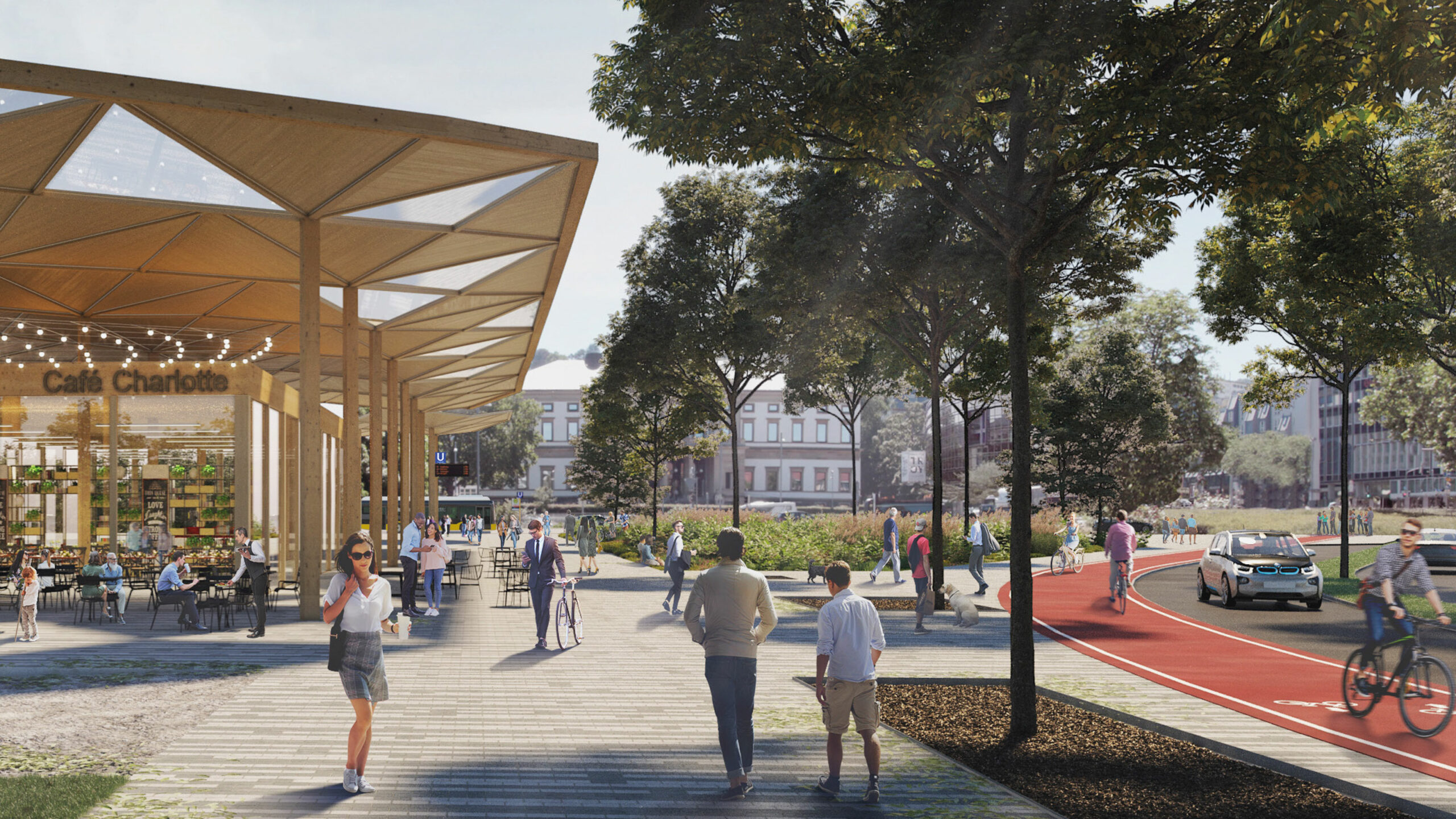 Although air pollution has negative effects on both public health and the climate, countless cities still have heavily trafficked roads – in the city centers. What kind of cities would we have if we turned these routes into new public urban spaces? We had the opportunity to develop a proposal for this. A proposal that we are happy to share as inspiration for how we can design more sustainable and resilient cities.

The B14 is a multi-lane motorway that runs straight through central Stuttgart in Germany for more than four kilometres. The impact of the motorway on the city has been under discussion for several years, prompting a number of architecture competitions. Instead of accepting increasing traffic volumes and high levels of car use, the city announced an international competition in 2020 for the sustainable and innovative transformation of the B14. By halving the space available to vehicles, the city was seeking a paradigm shift with a proposal to bring urban, ecological, and social qualities to the fore in a way that was also economically and technically feasible.

Our proposal for central Stuttgart sought to transform the wide B14 corridor into several sequences of public spaces. We call the proposal Stuttgarten Sequenz.

The proposal is a tribute to city life, where the nuance of spaces for movement and for relaxation would form urban spaces that would allow the city to be enjoyed and discovered in new ways 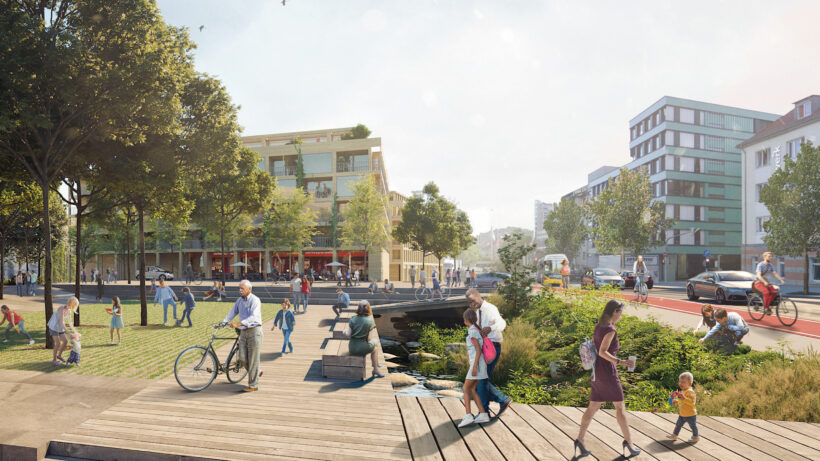 The proposal further sought to bring surrounding street spaces together and would see new buildings that would modulate the gap created by the motorway. A concentrated street space with well-defined public spaces would interact with new and transformed architecture. Stuttgart has several public spaces that lack urban demarcation and where urban functions are far apart. Our proposal put forward a closer connection between public spaces and private neighbourhoods to encourage dialogue between the city, its citizens, and businesses so that together they could revitalise the city’s most central areas. Different areas of the city would be more closely linked to form safe, populated urban spaces that would serve as attractive meeting places in the Stuttgart of the future.

Through strategic design and the location of green spaces and water, we sought to create recreational spaces that would help to cool the city, improve air quality, and reduce noise levels.

The proposal also sought to increase the number of parks in the city. With a clear urban front, a boardwalk, lined with new architecture in conjunction with the recycling of existing industrial buildings, the Schlossgarten would be opened up and linked to urban life. Creative traffic planning would provide space for the more sustainable future transport of people and goods. 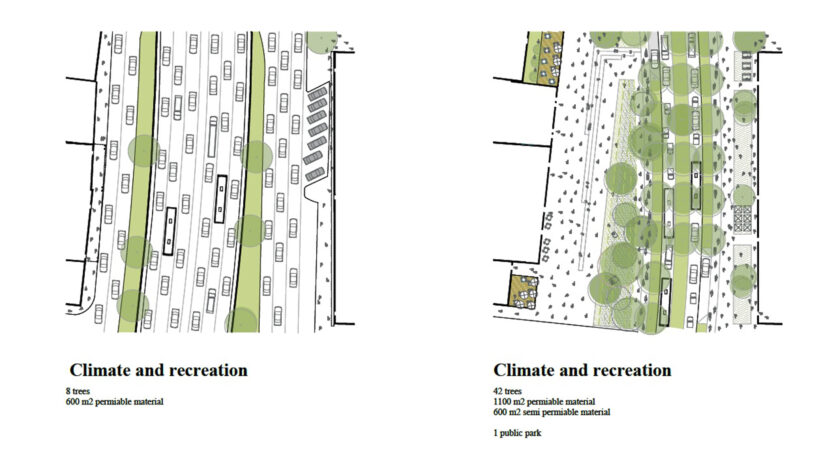 To the competition we set up a team together with Stuttgart-based Orange Blu, Transsolar, and Buro Happold. The collaboration resulted in a proposal that would transform central Stuttgart into a sequence of urban environments. White put forward an urban planning proposal that would create spaces for more sustainable lifestyles, promote mobility, and enable encounters between the many different people of the city going about their day-to-day lives. 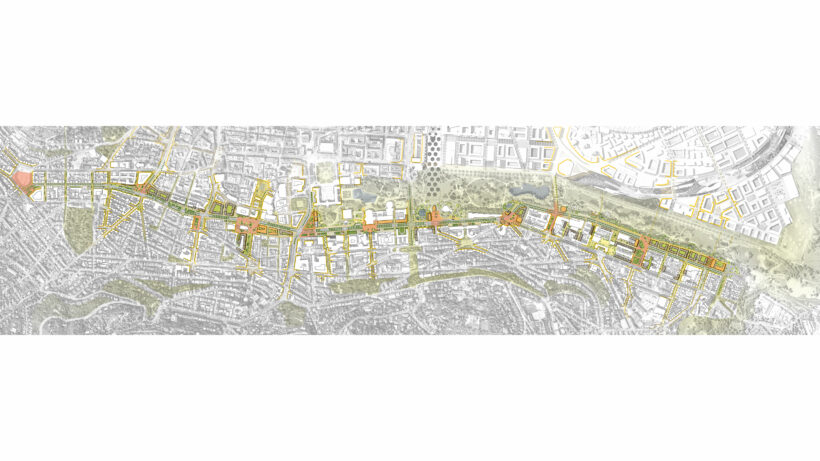 Together with Orange Blu’s knowledge of the city’s historical and current challenges, an innovative proposal was designed that differs from the award-winning German proposals by truly joining the city together by way of architecture that interacts with urban spaces, creating new public spaces at street level where urban life can flourish. We worked together with Buro Happold and Transsolar on designs for future mobility challenges and sustainable microclimates.

Twenty-three teams took part with White as one of the five international teams invited to participate. Our proposal did not go all the way, but we send our congratulations to asp Architekten and Koeber LA on another major win for urban construction in Stuttgart. 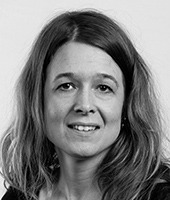