“Gender equality is one of the cornerstones of Swedish society”

This article was originally published in Dezeen, as a reply to Dezeen’s gender diversity survey.

RIBA lecture - Must do Better: Improving Gender Diversity in Architecture

RIBA hosts an event on diversity after being “stunned” by Dezeen’s gender survey, and Alexandra Hagen is one of the speakers. The event, titled Must do Better: Improving Gender Diversity in Architecture takes place at RIBA, 66 Portland Place, London W1B 1AD, from 7:00pm to 8:30pm on Tuesday 6 March.

It was a mixture of curiosity and disappointment that I read the results of the Dezeen gender diversity survey. What I found particularly interesting was that two of the three practices with executive management boards consisting of more women than men were Swedish: White Arkitekter and Tengbom.

Sweden is one of the world’s highest ranking countries for gender equality. Our cultural environment today has stemmed from a 1972 government initiative to make equal opportunities between the sexes a central political issue. Today, gender equality is one of the cornerstones of Swedish society. The aim of Sweden’s gender equality policies is to ensure that everyone enjoys the same opportunities, rights and obligations in all areas of life – and I believe this is reflected in Swedish workplaces.

Perhaps it is a little easier for practices like White to achieve gender equity at all levels of practice, when our cultural mindset is shaped and supported by government policy. For example, it seems that in the UK, one of the main barriers for women progressing to executive level is the lack of support for those who need to balance childcare and a professional career. Over the last 15 years in Sweden, we have really seen a greater effort to support and promote women in the workplace. Full-time childcare is guaranteed to all parents with children up to the age of 12; the aim is that nursery school and after-school is affordable for all.

We have really seen a greater effort to support and promote women in the workplace in Sweden.

At the age of 34, I became international director at White. At the time, I was eight months pregnant and there was an understanding that, due to the nature of the role, there would not be huge allowances to take time off.

The first of two factors that let me progress in this senior role was shared parental leave, which at the time was 480 days of paid leave that could be divided between parents. This included two months leave per parent that was non-transferable to each other – my husband either took his two months, or lost it (this allocation increased in 2016 to three months per parent). Sweden was actually the first country in the world to replace gender-specific maternity leave with parental leave in 1974. As my husband took half the responsibility for childcare, I was away from the office for a shorter length of time.

The second factor was the faith shown by my employer, who believed that I could excel in a senior management role, irrespective of needing to also care for two young children. To achieve equity in practice, it is precisely this sort of leadership vision that is sorely needed; the ability to see your employees as multifaceted people with commitments and interests that need to be balanced with those of the company. Work is only one part of your life and, as employers, this is something that we need to respect. Design is something that is potentially endless, but the whole point of practice is managing this within a given timeframe.

At White, our staff are our most valuable assets; attracting and retaining the best employees is fundamental to our organisation, forming a significant part of our competitive advantage. Hour-for-hour time off in lieu is offered, along with a range of benefits that include share options, as we are an employee-owned company. Creativity comes from creative environments – we invest in people to ensure that we retain an inspired, engaged and focused workforce. Findings from the Harvard Research Institute underline the importance of relationships to mental and physical wellbeing; spending time with spouses, family, and friends is crucial for health and longevity. Giving employees time to cultivate these relationships is of utmost importance for all of us.

At White, we are concerned with equitable architecture – architecture for all. By this we mean designing environments that are accessible to everyone, at all stages of life, encouraging active citizenship by empowering people to take ownership of the world around them, and to increase wellbeing through inspiring sustainable ways of living. We cannot truly serve our diverse communities if we ourselves do not reflect this diversity and ethos as a practice. Gender is one aspect; and we must remember that there is fluidity to this; our workplaces need to safeguard and provide equal opportunities to those who identify as female, male, between and beyond.

Work is only one part of your life and, as employers, this is something that we need to respect.

Companies that embrace gender, racial and ethnic diversity are more likely to display higher levels of productivity and greater financial returns above their national industry medians. If we look at Japan, a struggling economy is in part due to the lack of mobilisation of women in the workforce. Over the last 10 years, White’s workforce has increased its diversity in all forms; there is gender equity at all levels, a significant international workforce from a wealth of different cultural and social backgrounds, as well as a mix of education and professions that is not traditionally found in architectural practices. At White, it is not unusual to find architects, urban designers, engineers and landscape designers working alongside social anthropologists, researchers, craftspeople and virtual reality specialists. I believe that this mix of skills and cultures allow us to design a better built environment.

However, despite progressive government policy, there is still some work to be done before we reach absolute gender equity in Sweden. One of our current White Research Lab projects, Flickrum – Room for Girls, seeks to redress the gender imbalance in our public spaces. As cities are planned today, we found that public spaces are not used equally amongst girls and boys. Until the age of seven, boys and girls use public facilities such as playgrounds equally, but from the age of eight this changes. Statistics show that from this age onwards, 80 per cent of the users are boys, while girls feel 1- times more insecure in these “shared” spaces. We found that there was a lack of knowledge regarding how to plan and design public places in ways that correspond to young girls’ needs and preferences. The knowledge gap is partly explained by the absence of children, not just girls, in the urban planning process. A more inclusive process would result in a more equal urban environment.

I am privileged to work for a company that is committed to applying diversity and humanitarian principles to every project we work on and every office we open. Outside of Sweden, White has branches in Oslo, København and London, all led by female directors and all embracing the same ethos as our Swedish counterparts. But how do you progress towards equality in practices operating in countries that do not have the same top-level support as Sweden? I think the answer is twofold.

If our responsibility as designers is to ultimately improve the world around us, then change must start with us

Firstly, senior management need to act on the vast body of evidence that proves greater levels of workforce diversity correlates to higher productivity, loyalty, quality of work and subsequently, greater financial performance. It lies within our power to change internal policies to create the most efficient working environments.

The second is at an interpersonal level; if our responsibility as designers is to ultimately improve the world around us, then change must start with us. We must question our prejudices, see people as a whole, actively suggest ways to work in better and more balanced ways. We must not be afraid to challenge unfair practices and stand up for each other. Real change can only happen when we use our collective voice. 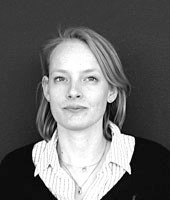