There is a modern timber building in the centre of the Swedish city of Örebro. The building is used as a refuge for women subjected to domestic abuse. To shelter and protect. The building in itself is a good example on how to create a smart and sustainable house on a very limited area between existing buildings in the city.

Kvinnohuset (Swedish for “House for Women”) is an NGO that supports and gives a safe haven for women and children who were victims of violence. Besides therapy groups and counselling, the organisation provides a home for those in a critical situation. When White was awarded this project, the priority was to design a safe environment in the middle of the city without building a wall or fence around it.

The NGO operates in two buildings. The one called Spruthuset, previously part of an old fire station built in 1899, has been repurposed and now hosts an office, meeting facilities, counselling and staff rooms. For the people living in this area there is a large shared kitchen and living room. The 11 new apartments are in a smaller replica of Spruthuset, connected through a glazed corridor. This five storey building is built with glued laminated timber supported by a stairwell made of concrete. A protected inner patio between both buildings is planned, with outdoor furnishings, areas for planting vegetables and a playground.

The residential building with 11 apartments on five floors is built with a laminated timber frame which is stabilized by a concrete staircase.

Timber was the ideal choice for this tight infill project. The frame was erected incredibly fast, it only took two weeks!

The timber façade gives a welcoming impression and stands out from the adorned buildings around, while the bright warm colours blend in. On the panels we can see the timber framework, which is rather unusual.

The choice of wood as a material has many advantages. For instance, the builder can use just-in-time delivery, where large construction elements such as pillars or framed structures can be delivered on site on the day they are to be used. A construction site where timber is a predominant material also produces less noise which obviously is good news for the neighbours. 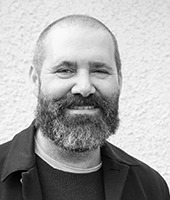